Local coal proprietor Richard Evans sinks number 1 shaft with a diameter of 18 feet.This was completed in December 1909 when the shaft was extended to a depth of 1,823 feet.

The sinking of no.2 shaft at Sutton Manor began in July 1906 with a shaft diameter initially measuring 22 feet. This was completed in 1912 and extended to a depth of 2,343 feet.

The equivalent of 5 Blackpool Towers. 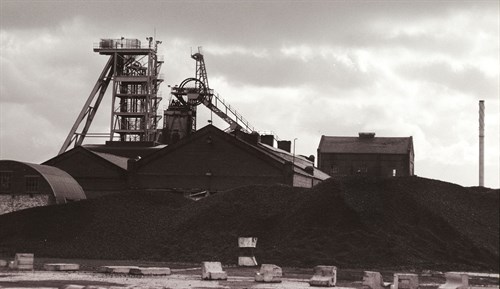 Coal production starts at the Colliery 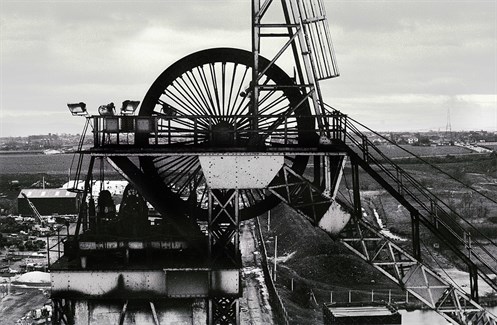 This year sees Sutton Manor Colliery at its height employing 1,400 people and producing 1500 tons of coal per week. 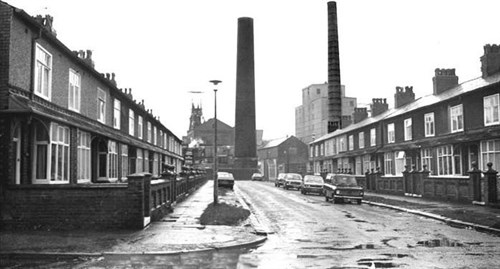 ﻿The National Coal Board announced a £14 million investment in Sutton Manor that they predicted would provide a "kiss of life" for the "viable" pit, converting it into one of Britain's most modern collieries.

﻿May. A year-long strike commences. This is a particularly difficult period in the colliery's life not only for the pit but its workforce as well. 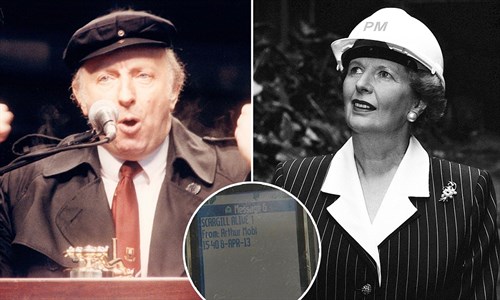 ﻿May. British Coal announced that the pit was unviable and is scheduled for closure. They claim that Sutton Manor Colliery had lost £23 million over the previous five years. 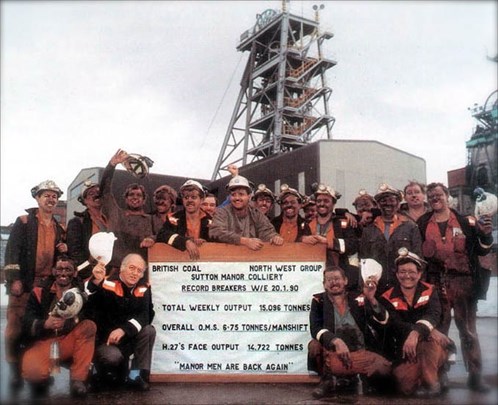 June. The colliery closes with over 40 years of coal still underground.

﻿February. The Forestry Commission leased the site from St Helens Council and after consulting with the local community put project Wasteland to Woodland into operation.

﻿First the heavily compacted soil was prepared for tree planting and habitat creation,a procedure that took two months. Then fifty thousand young trees including alder, willow and ash were planted. The experts at the Forestry Commission choose Mixes of slow and fast-growing trees. 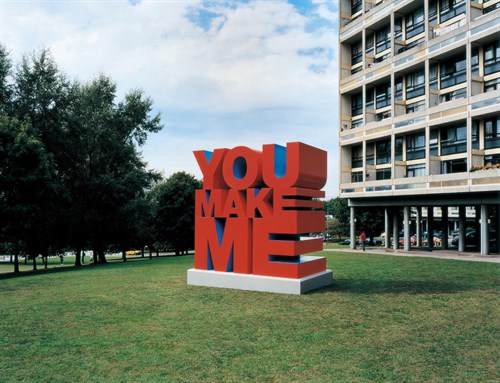 Sean Durney, the Arts Officer for St.Helens Council, writes the application and nominates the former Sutton Manor colliery site for a new Channel 4 TV programme called 'The Big Art Project' where sites aim to inspire and create unique works of public art across the UK. Its an opportunity for the public to be at the centre of a unique initiative right where they are living and become a central character in a prime-time television series. Sean wasn't alone, however, as more than one thousand four hundred people across the UK also nominated sites within their own local communities. With so much competition it was clearly going to be tough to make the final cut but the St.Helens bid had an edge as a former miner's focus group had been quickly formed to partner St.Helens Council. The former pitmen have a strong connection with their old workplace in Sutton Manor and were keen for a form of memorial on the site. Former miner Gary Conley is asked to come on board to form a small focus group of ex Sutton Manor miners who will work with an artist to commission an artwork backed by the local authority. Important behind the scenes Council contributions are made by John Whaling (Economic Development Manager who was also the Dream Project Manager) and Bob Hepworth (Director Urban Regeneration & Housing).The project is given a working title,  'Ex Terra Lucem' (from the earth comes light). It's, at the time, the St Helens former town motto based around coal and glass. Together they identify with a mission statement for the artwork that it should  :

﻿February. The council recruited Laurie Peake of art commissioning agency Liverpool Biennial, to act as curator for the project. Laurie had only recently commissioned Anthony Gormley's work on Crosby Beach entitled 'Another Place'.

March. Channel 4 commission independent production company Carbon Media to make the TV series and recruited a number of art and regeneration experts to sift through the applications.  Within months Channel 4 announce a shortlist of twelve sites, which includes the St.Helens bid. The selection panel then had the tough task of narrowing down the dozen sites to the six that would feature in the TV series.

April.  The six winning sites are announced and the former Sutton Manor Colliery site misses out from the UK's biggest ever public art commissioning scheme. The Big Art Project would instead comprise communities in Burnley, Cardigan, Isle of Mull, Newham in East London, North Belfast and Sheffield.  All the planning and discussions with proposed stakeholders and funders in St Helens had come to nothing.  Or had it?


November. The Project's governing body, the Big Art Trust, seeing that all of the chosen sites were encountering difficulty, decided to review its decision on discarding St Helens and include the Sutton Manor site as a seventh location.

February. Former miners steering group, chaired by Laurie Peake hold a meeting to select an artist to work with. From a short list of 12, the former miners unanimously choose renowned Catalan artist Jaume Plensa to submit a proposal, of which he accepts. It is a massive coup to get someone of his stature involved. The former miners also come to a decision that now they do not want a literal mining monument but instead a structure that as well as referencing the past would be contemporary and forward-looking.

April. Barcelona-born Plensa visits the Sutton Manor site, meeting the former miners. An immediate close bond is formed with Plensa, with him saying, " The miners are so strong people but they also passionate..... The site is an amazing place".

August. Jaume Plensa meets the steering group with his first proposal. It's a 20 metre-mining monument in the shape of a 20-metre miner's lamp,  'The Miners Soul' Disappointingly Plensa had produced a structure looking through the former miners eyes keeping the site in the past. The former miners reject the proposal and ask for something more present day and progressive. 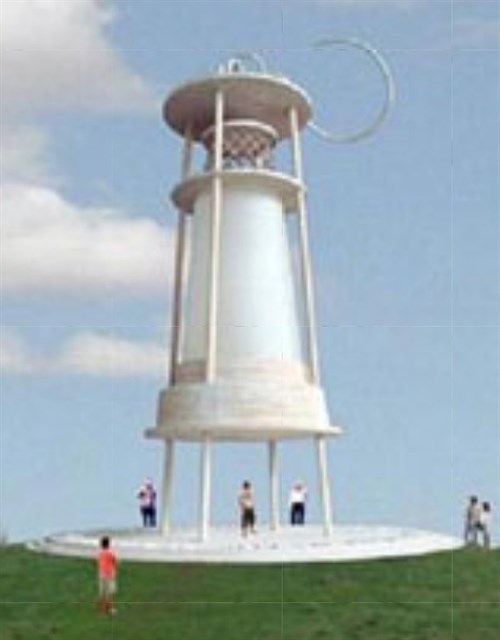 February. Jaume Plensa returns to St Helens with his new proposal called 'Dream'.  Dream takes the form of the head and neck a 9-year-old girl that has been elongated by a third. Her eyes are closed in quiet contemplation, dreaming not only about her future but also that of the former colliery site and St Helens.  It's proposed that the landmark will give hope and aspirations for future generations and become a positive symbol for the area. It's to be constructed in English concrete and Spanish dolomite marble. It's white to replicate light
and to contrast the darkness of the mine and coal that lies beneath. Finally, she is to sit on a plinth of a giant miners tally as a reminder of the heritage of the site. The structure is to be lit, with an additional beam of light from the sculptures head that goes into the sky. The former miners love it and give it their full backing.

Jaume Plensa and Gary Conley with the maquette of Dream. 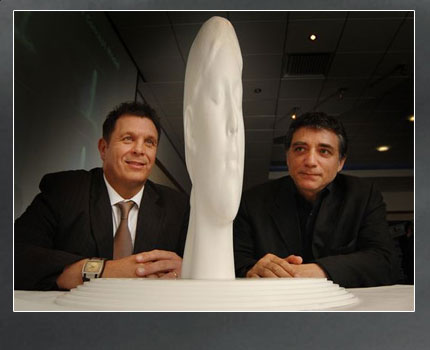 September. St.Helens Council grant conditional planning permission for the Dream structure. However, the team's delight that the work could finally begin in earnest was tempered by the news, albeit expected, that Dream could not for the time being be illuminated.

October. Evans Concrete of Derbyshire wins the contract to fabricate Dream in ninety individual panels of pre-cast concrete, which is to be conveyed to St.Helens in sections.  Arup are appointed as Lead Consultant with Cheetham Hill Construction the lead constructors.

﻿April. The topping off ceremony takes place as the final section of Dream is winched into place to much media publicity.

May. Channel 4's 5-week TV series 'The Big Art Project' starts with the St Helens site and Dream becoming pivotal to the success of the programme. Along with Burnley, St Helens becomes the only site to produce a piece of artwork of such magnitude.

Promo for 'The Big Art Project'. Notice the date. Channel 4 had to put the programme back nearly a year waiting for the St Helens project to finish. 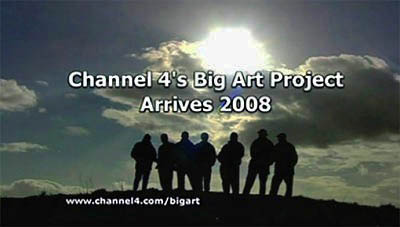 June. The official opening ceremony takes place with a crowd of over 2 thousand people in attendance. Its a very special day for all concerned with a traditional Whit Walk, brass bands, choirs, and the guest of honour, Jaume Plensa. 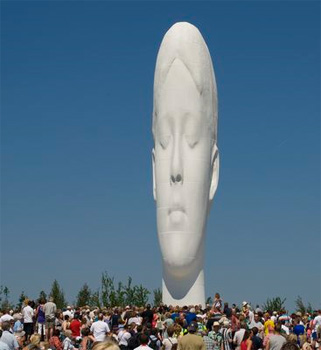 November. St.Helens Council make an ambitious digital interpretation commission. From the summer of 2011, the stories of Sutton Manor Colliery, the site, its ecology and
Dream are being told using a variety of media.

September Dream is lit using the ambient lighting around the base. Unfortunately, 2 weeks later the lights are vandalised and are turned off.

BBC's 'The One Show'. Alex Riley interviews Gary Conley about Dream for a report on public art. Gary revealed that 64,000 people had visited the Sutton Manor site in just one year.

Screenwriter Frank Cottrell Boyce visits Dream for a Radio 4 broadcast 'Sons and Lovers' where he tells Gary Conley that he used Dream and the motto 'Ex Terra Lucem' as inspiration for the opening ceremony for the 2012 Olympic Games in London which were revered all over the world.

There have been challenges and hurdles along the way, but ultimately Dream is a triumph, a stunning visual feast, and a spectacular object lesson in the "art of the possible", demonstrating what can be achieved when committed people with a shared vision work together towards a common goal.