Dream's location within the Mersey Forest community park on Forestry Commission land made environmental considerations paramount, and ecology, species and habitat surveys had been conducted accordingly.

Their recommendations were completed prior to site operations: installation of reptile hibernaculas and bat boxes; management of Knotweed areas; tree protection methods; "toolbox talks" for construction staff re. ground-nesting birds and wider habitats. 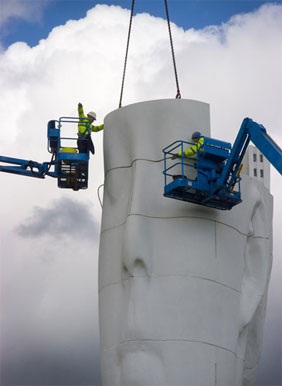 Phase one of the construction process involved site establishment, preparation, landscaping, and drainage.

Meanwhile the 90 bespoke individual moulds were being manufactured by Cordek in Sussex and then transported to Evans Concrete in Derbyshire, where they were used to create the 90 individual concrete/dolomite panels comprising the sculpture.

This casting process took 60 days to complete, and the panels were transported to Sutton Manor two at a time during March and April 2009.

Phase three was the installation of the panels onsite to create the artwork, which took only 25 days to complete.

Each panel was lifted into place by crane onto the plinth where erectors and a site engineer installed them piece by piece, level by level (14 in total), requiring painstaking attention to detail and pinpoint laser accuracy.

The panels were grouted into place and then the whole sculpture was finished off with each piece being sealed horizontally and vertically.

The topping out ceremony to mark the installation of the final piece on the crown of the head took place on 21 April 2009.

The final phase involved site reinstatment and landscaping for which existing topsoils were reused in order to reduce the need for imported materials.

Local/regional suppliers were used wherever possible throughout the construction process, e.g. gravels, sands and official photography from St.Helens; concrete and site security from elsewhere on Merseyside; lead contractor, staff, diesel, and hoardings all from within Northwest England.